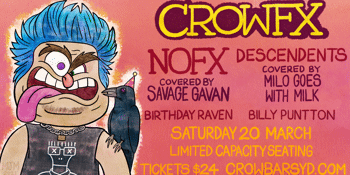 Get ready to pay tribute to the godfathers of punk rock, as Sydney bands team up to play covers sets of NOFX and Descendents songs.

Savage Gavan will be performing punk classics and deep cuts from NOFX’s extensive back catalogue. Milo Goes With Milk will be serving up the Descendents tunes. Sydney 3 piece band Birthday Raven will be playing their political charged, furious, punk rock originals and folk punk sweetheart Billy Puntton will be opening the show.