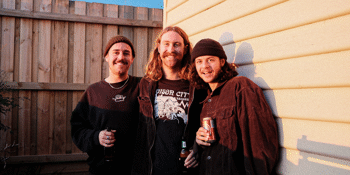 That same summer, the boys kicked off their first national headline tour including festival slots at Melbourne Music Week’s CIVIC SOUNDS and NinchFest. Cutting the ribbon on their debut album Just What You Want, 2019 saw the band perform at LochHart Music Festival and sell out multiple venues across the country including Howler, Workers Club, Yah Yah’s and Cherry Bar. In the year following,The Grogans dropped their self-recordedand mixed magnum opus Day / To / Day resulting in a completely sold out National Tour.

The Grogans have supported the likes of Ocean Alley, Maddy Jane, Northeast Party House, Dear Seattle, Drunk Mums, The Chats and Polish Club, and will soon take their captivating live show onthe road again when they play NYE on the Hilland support Hockey Dad across 18 dates on their 2022 Regional Tour. The band have also been announced for the rescheduled Yours & Owls festival next year, and as the main support for WAAVES(US) at The Corner Hotel. With their infectious coming-of-age surf single ‘Just A Kid’ the first tantalising taste of a larger incarnation of work on the way, 2022 is shaping up to be another massive year asThe Grogans continue to prove their status as one of Australia’s most intriguing acts of recent times.