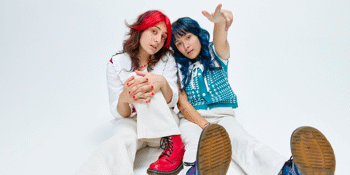 TBA
Crowbar Sydney (Leichhardt, NSW)
Saturday, 1 October 2022 8:00 pm
90 days away
18 Plus
Metal / Hard Rock
Rock
Emo
Music
Punk
Send this event to
Following the release of their gritty post-EP single “Terrible”, juice-box punks Teenage Joans are set to head out on a massive headline tour later this year. Calling it the “Big Kid” tour, it’s in the name - the Joans are playing 11 dates around the country, and they are so stoked to not only be heading back to their favourite cities, but to also be finally bringing their infectious energy to places they’ve never before headlined.


After taking out the triple j unearthed high crown in 2020, the Adelaide two-piece have not slowed down, releasing single after single, signing to Domestic La La  and touring Australia with the likes of Ball Park Music, Amy Shark, Sly Withers and The Chats. This was quickly followed by sets at Unify, Yours and Owls, NYE On The Hill, Summer Sounds festival and a support slots with Violent Soho, Ruby Fields, Bugs, Private Function and more.