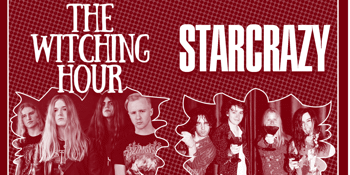 After several sold out Covid-safe gigs, Newcastle based band The Witching Hour are excited to be back out playing and they will be bringing their heavy, occultic riffs to the Crowbar, Sydney.

When their second headline Australian tour came to a grinding halt due to the pandemic, the band hit the studio to record their latest release “Sleep With The Stars”. The single has received radio play in Australia, UK, and the US. In addition the track was selected by Alice Cooper to be featured on his program “Nights with Alice Cooper” on Triple M. With strong global attention on all streaming platforms and several Triple J Unearthed chart toppers, The Witching Hour were ranked at No.11 out of ‘the 20 Most Played’ on Triple J Unearthed for 2019’.

Within only a year, STARCRAZY have gained a strong local following, released a bombastic Debut EP and have received ongoing radio play from Alice Cooper, as well as support from notable music media websites at home and abroad.