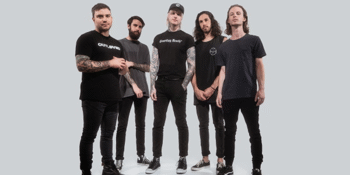 Stepson Help Me Help You Tour

with OUTLOVED & Rumours
Crowbar Sydney (Leichhardt, NSW)
Friday, 4 February 2022 8:00 pm
16 days away
18 Plus
Dance
Electronic
POP
Punk
Rock
Metal / Hard Rock
Australian Artists
Music
Send this event to
Last week, Brissy band Stepson dropped their latest cut from forthcoming album 'Help Me Help You' -  'Who Are We?' is out now on all digital stores and streaming platforms through Sharptone Records at http://shrptn.co/whoarewe!

The big, brash Punk anthem came with a fun clip where the band auditioned new singers as Brock was late to practice!

Today, they are announcing their Australian Album tour dates in May/June 2021! Sydney, Melbourne, Brisbane and Perth are about to experience the 'Help Me, Help You' album up close and personal! Tickets and Album Bundles can be found at http://stepsonpunk.com. Tickets will be on sale from Wednesday 17th March at 9AM AEDT.

The tour dates will see them joined by Sydney melodic hardcore act Bloom (who will be fresh off tour supporting Thornihill) & Melbourne's up & coming alt-metalcore outfit Rumours, whose EP "If Only You Could Feel Something Too" is out this Friday!

The tour kicks off on Friday 28th May in Sydney at Crowbar, back to hometown Brisbane at Brightside on Saturday 29th May, a Melbourne jaunt on Saturday 5th June at Stay Gold and Stepson only will bounce over to the West Coast to play Perth's Lucy's Love Shack on Friday the 18th June!

New album 'Help Me Help You' will be released on Friday March 26th. The debut album for the band was produced, mixed and mastered by Callan Orr of Avalanche Studios (Dream On Dreamer, Young Lions, Hands Like Houses). The album and album merch is available for pre-order with details at http://stepsonpunk.com.


Stepson's album 'Help Me Help You' will be released on Friday March 26th through Sharptone Records and is available for pre-order now at http://stepsonpunk.com. Tickets will be on sale 9am AEDT Wednesday March 17th, with all details also at stepsonpunk.com.